I’m not very good at writing up my projects to post here, but I hope to be able to put a bit more effort in this year, starting with a simple one.

In what feels like mid 2021 I purchased some “Laser Rubber Sheet 2.3mm Gray” from AliExpress. (A4 Laser Rubber Sheet 2.3mm Gray for Printing Engraving Sealer Stamp DIY Craft cut by laser engraver to make stamp rubber plate|Stamps| - AliExpress)
My plan was to make some custom stamps for personal use, as well as the occasional gift, the first of which is what is featured in this post.

I created this design based on a drawing my daughter did of a Murray River Turtle. Her school teacher from last year has one as a pet, so we made this the feature of a unique end of year gift. 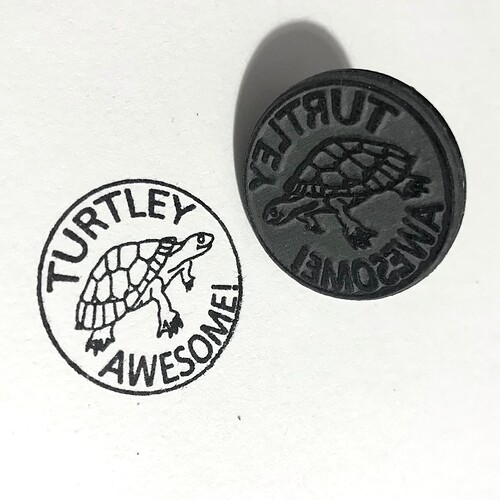 The original image was drawn on paper with Sharpie, I then took a photo and imported it into ProCreate. I had hoped this would be unnecessary, but ended up doing a little cleanup and thickening of the lines. You can see the original with the edited version overlayed below: 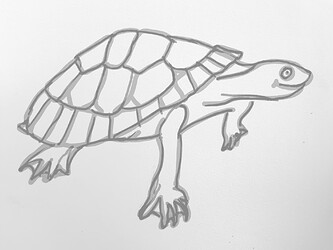 I exported this as a PNG, brought it into LightBurn and used the Trace feature to turn it into a vector.
I then added the Curved Text directly in LightBurn and a border using concentric circles.

To invert the stamp, so that the text and image are raised and the rest removed, I simply added another circle around the artwork, all on the same Fill layer. 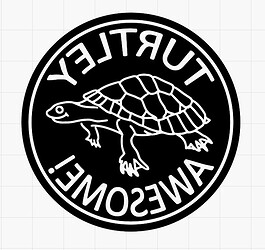 Tip: Having made a few different stamps now, the border turns out to help quite a bit in preventing smaller details from deforming during use.

After a few tests, I found the following settings gave good results: 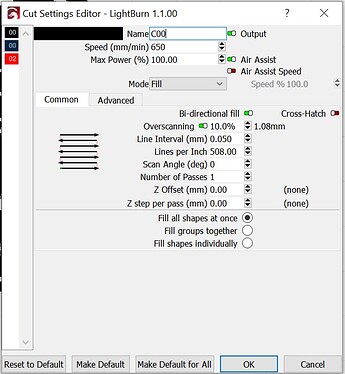 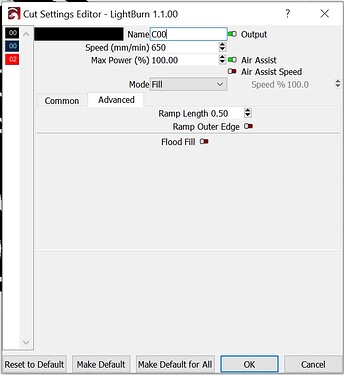 Note: Being cautions, I made sure to remove enough material to give a reasonable height difference between the raised and base levels. It is possible that this is excessive. These settings remove just over half the material (around 1.2mm) I will need to test if this can be reduced. 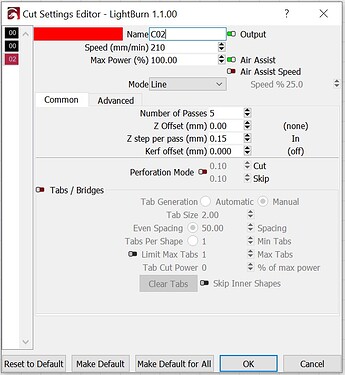 Tip: Using the (fairly) new Ramp feature in LightBurn I was able to angle the sides of the engraved areas to provide additional support to the stamp features. This was a game changer in terms of the minimum width of the detail possible and is visible in the preview as a shaded transition between white (no cut) and black (full power). 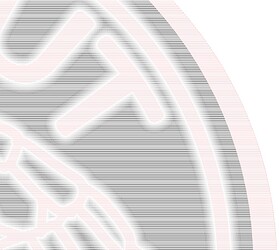 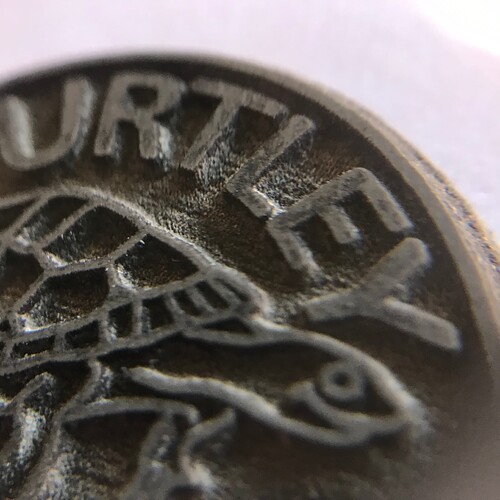 Following all this and on somewhat of a deadline now I would like to say I mirrored everything and ran the job. I did not, so now have a ‘spare’ perfectly good mirror version…

Note: One last note is that this stuff smells quite strongly when engraving. I used a F2000 on full power AND whole room extraction, and it was still noticeable.
Furthermore, the dust from engraving is super fine and gets on everything. Using the V2 Air Assist for both engraving and cutting kept the Focus Lens clean throughout, though I had to do a fair bit of general clean up, including the Fans, after each stamp.

The final product was around 40mm in diameter and after a good wash in warm soapy water, 3D printing a quick handle and cap then giving it a test, it ended up turning out quite well and was very well received.

I’d love to hear if anyone else has attempted to make a stamp on the Emblaser?

You and your daughter make a good team

Awesome job really. Love the details of the project

I also saw in a previous post (maybe on Facebook) that there is a laser rubber in the market that is odorless.

Really appreciate the step by step stamp making. Hopefully i get to try it soon enough…

Thanks for the feedback!

Mimz_Jay, if you get to try the ‘odourless’ material please let me know how it goes!!
I’ll defiantly go for this option next time.

Lliam,
I thought I would experiment with your settings for the rubber stamps and I couldn’t be more pleased with the results. My wife now has several ideas for custom stamps that I have been cutting. She is a hard core scrapbooker and rubber stamper. My first attempt is below, sorry it’s been used numerous times so there is still ink but I have cleaned off as much as possible for the picture. I have since gone on to cut several more complicated and larger stamps all turning out very well on the first first try.
I have been using a material that I purchased on Amazon and it works extremely well: DEWALLIE Rubber Stamp Sheet for Laser Master 2 PRO LF SF Cutter and Engraving Machine with A4 Size 2.3mm, Grey
The smell is present after cutting but with my downstream fume extraction system (custom built, design taken from my work on much higher power 50+ Watt CO2 lasers) it’s only noticeable when you open the lid to remove the stamp when finished. I don’t smell anything when cutting.
Pat 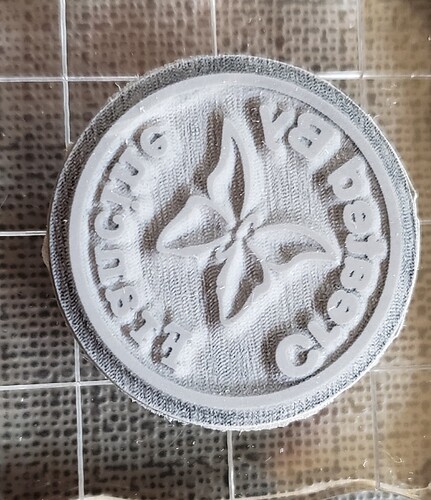 Looks like you can get a nice deep engraving on this material. What settings do you use?

Here are two snapshots of the screens. I have played with various ramp lengths but these seem to work the best. Also, the gray material seems far superior to the red for getting good crisp lines and detail, and takes ink better. 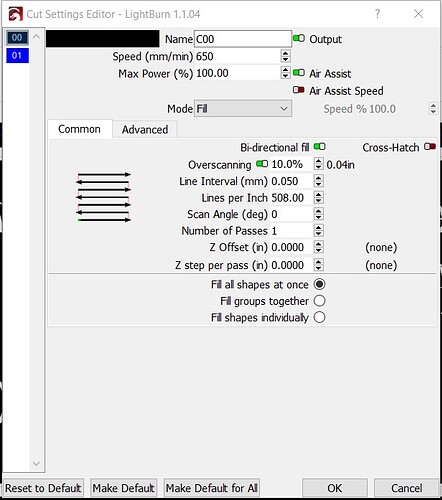 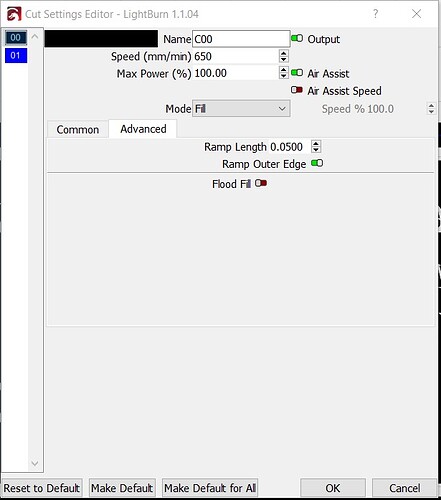 Great info Pat - thanks for sharing!
The lighter material colour shows the ramp feature far better than the dark grey material I used too!

Lliam,
I’ll take some snap shots of the box and specs on the extraction fan. It’s a sealed blower system so the laser exhaust air stream doesn’t mix with the motor cooling air and so there is no potential for explosion. It also has a simple variable air flow control to prevent to much pull down (vacuum) on the lid. I have to dismount it from the wall so I can take a few good pictures.
Stay tuned.
Pat

Lliam and Dom,
I thought I would follow-up with some further work I have done on rubber stamps. I have refined the parameters and the results are very much to my wife’s liking. She is now finding other stamps I can custom make her.
The biggest affect on the amount of detail I have found to be in the “ramp” setting. I significantly reduced it and the change was amazing. The very fine detail now stands out and replicates very well. The small amount of ramp is enough to still properly support the fine detailed lettering.
I have attached snapshots of my settings and a picture of the stamp, and as stamped.
I continue to use the gray material I listed above, purchased from Amazon. It has given the best results of the four materials I have tried so far.
Pat 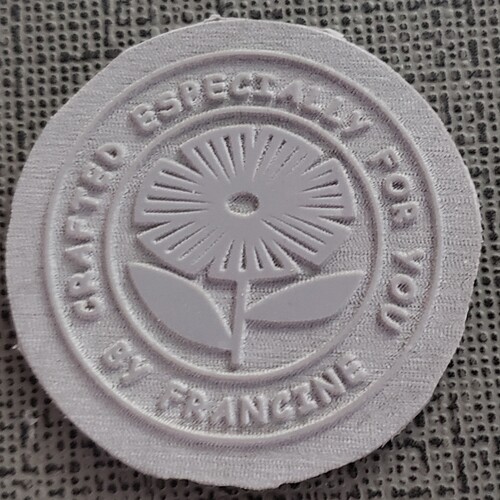 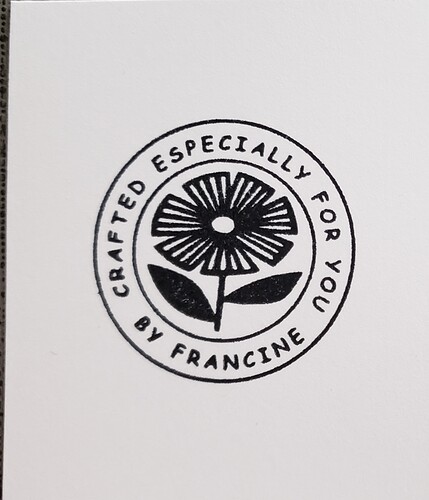 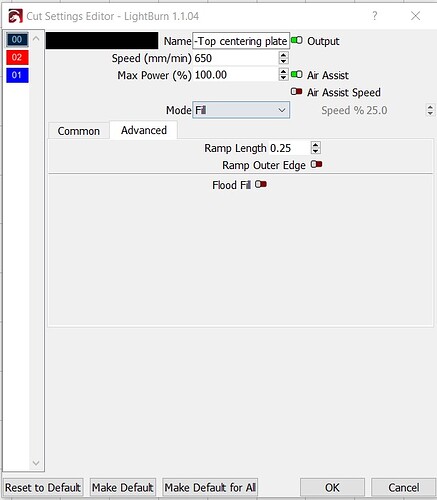 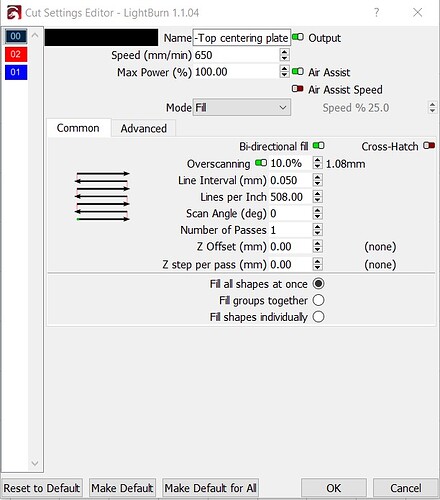 This looks great.
I will try your tweaks out soon and look forward to getting some more detail out of the it.